Pedestrian bridges or more commonly known as footbridges offer great access for pedestrians and cyclists by linking two distinct areas such as roads, mountainous terrain, rivers etc. Since time immemorial, these bridges have facilitated safe movement and with changing technology, these bridges have witnessed great improvements in terms of design, strength, structure and material used. Footbridges play a huge role in lifting the aesthetic appeal of the landscape, so modern designers have turned them into pieces of structural art and not just a simple structure linking two areas. At some places, these footbridges are just used to decoratively link two areas in a city. They are also located to let pedestrians cross roads without slowing down or disrupting the traffic such as pedestrian bridges near schools. Also some footbridges are made as such to ease the movement of workers to a part otherwise difficult to reach. These bridges are known as catwalks and are found in theatres and refineries.

So, below is a list of few of most appealing and interesting designs of pedestrian bridges from all over the world: 9. Skybridge, Sochi: Located in Sochi, Russia, it is the longest pedestrian bridge in the world and has the world’s highest swing and a 700m zip wire. It forms a part of the SkyPark and has two observation platforms both offering magnificent views of the Black Sea. This bridge offers bungee jumping and zip lining if walking along this bridge doesn’t give you the adrenaline rush itself. 8.Ponte Segunda Circular, Lisbon: Designed by Maximina Almeida and Telmo Cruz, this pedestrian bridge is located in Lisbon, Portugal and creates a beautiful network of connections for pedestrians and cyclists across the Second Circular Road. The design was inspired by the farm paths in Portugal which used to form a crisscross network around the landscape and the distinctive orange passage is mainly constructed of steel. 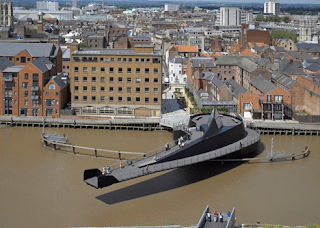 7.Scale Lane Footbridge, Hull: Shaped like an apostrophe, this footbridge in Hull, England was designed by the architectural firm McDowell+Benedetti. This swinging bridge links Scale Lane with Tower Street, thus creating a novel route for pedestrians between the city’s museums and accommodates the river traffic as well. One of the most striking and attractive features of this bridge is that it is the only bridge in England where people can stand on the bridge as it swings to allow passage of boats and ships. Another excellent feature of this bridge is its wind-sheltered seating, a restaurant and a raised platform to enjoy the scenic beauty.

6 .Puente de La Mujer, Buenos Aires: Located in Buenos Aires, Argentina, this footbridge was designed by Spanish architect Santiago Calatrava. This bridge is popularly compared to a couple dancing tango. The beautiful structure is divided into two fixed sections and a movable one in the middle which rotates to a full 90 degrees facilitating the passage of ships. The name of the bridge translates to “Women’s Bridge” in English. Many notable women work or live in the area surrounding the bridge which is also flanked by trendy restaurants and hotels. 5. Merchant Square Footbridge, London: Designed by the Knight Architects, this 20m long pedestrian cantilever bridge is located across the Grand Union Canal in London and resembles the unfolding of a traditional Japanese hand fan. The deck is formed by five steel beams of varying lengths controlled by hydraulic jacks. When the bridge is opened, the five beams rise to different angles to create a fan-like effect. When completely closed, it offers a 3m wide crossing for pedestrians.

4.Rolling Bridge, London: This 12m long London bridge located close to the Merchant Square Footbridge, showcases the genius of the architect Thomas Heatherwick as the bridge levitates upwards, curls up to form an octagon and allows the passage of boats. To allow the passage of pedestrians over a small section of the Grand Union Canal, it curls back to take the shape of a regular bridge. 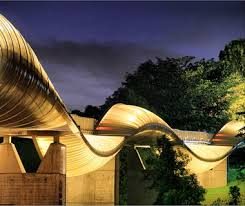 3.Henderson Waves Bridge, Singapore City: Singapore’s tallest pedestrian bridge, the Henderson Waves Bridge links Mount Faber Park to Telok Blangah Hill Park. This spectacular bridge was designed by IJP Corporation and RSP Architects Planners and Engineers. Its wave-like form is made of steel and wood and the curved steel ribs have small hidden alcoves with seats which lets tourists sit and enjoy the natural beauty and even see the Singapore City and its harbour. At night, the bridge is illuminated by LED lights which increases its beauty manifold by intensifying its snake-like structure. 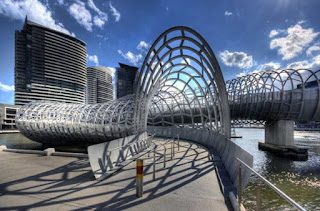 2.Webb Bridge, Melbourne: The Webb Bridge in Melbourne, Australia is built over River Yarra located near the southern end of the Docklands. It resembles the fish baskets and nets used by the native people of Australia and looks like a mesh or a web and hence, the name. It was designed by Denton Corker Marshall in collaboration with artist Robert Orwen. One of the most spectacular features of this footbridge is the material used for its construction as the bridge uses the recycled sections of the previous disused bridge, the Webb Dock Rail Bridge. This pedestrian bridge was constructed as a part of a public art project. 1.The Gateshead Millennium Bridge, Gateshead: One of the most striking features of the Gateshead Millennium Bridge is it’s tilt as it is the only tilting bridge in the world so far. The design of the bridge is a marvel; the bridge tilts upwards to a 40 degree angle when boats pass underneath the River Tyne. This bridge was designed by the architectural firm Wilkinson Eyre and links Gateshead and New Castle in England. It is also popularly referred to as the ‘Winking Eye Bridge’ due to it’s shape and tilting method. The two curves of the bridge form the deck and it’s support.

The above mentioned bridges are spectacular and breathtaking, but there are a few other footbridges which could not make it to the list but are no less in their design and innovation.

They are the Living Roots Bridge in Cherrapunji, India and the Moses Bridge in Netherlands. The Living Roots Bridge can be very well called a man-made natural wonder. The Khasi tribe of the region used the strength and flexibility of the ancient rubber trees in that region and learned to grow them in a particular direction to take the shape of a bridge. These footbridges take almost a decade to grow and can extend up to 100ft in length. They are a very smart alternative to wooden bridges which decay easily in the region due to occurrence of heavy rainfall all throughout the year and have an expected life of a few hundred years. To transform Fort de Roovere into a recreational area for cycling, the Moses Bridge in Netherlands was developed by the RO&AD Architect Studio. It is built through a moat entirely from Accoya wood which also prevents the disruption of the beauty of the moat. This ‘invisible’ bridge lies like a trench and disappears into the landscape. The height of the water in controlled by adjustable dams on both sides of the moat to prevent flooding of the bridge.