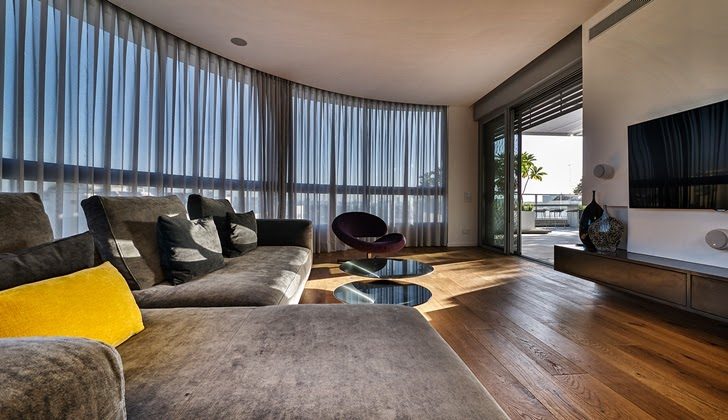 This 230 square meters penthouse apartment is designed by Liat Peled Chajut and located in Ramat HaSharon, a city located on Israel’s central coastal strip in the south of the Sharon region, bordering Tel Aviv to the south, Hod HaSharon to the east and Herzliya and Kibbutz Glil Yam to the north. “Owners are a couple with a teenager who purchased Penthouse from constructor. The couple purchased the Penthouse with exterior walls only and turn to an interior designer to accommodate lifestyle and needs. The space was divided in two: public space (includes- living room, kitchen and dining area. Private space, includes – 2 master bedrooms, 1 guest room. The dominant chosen colors to the spaces was, white, grey with purple touch. The apartment is long and narrow therefore the designer chose a tripled layered oak parquet floor that emphasizes the apartment length. The chosen color for the public area was “extra white” except for a brick wall in the kitchen that was painted in matt epoxy white to define the kitchen from the living room. And another brick wall plaster covered above the fireplace in the living room. A choice of a round lamp and crescent shaped lamp was set to divide the kitchen from the living room.

The kitchen was L shaped. One side of the kitchen has floor to wall cabinets, on the same side the refrigerator, stove and wine fridge are located. The other side of the kitchen wall has the midsized cabinets, wide work surface. Covered up in concrete. In the dining area the designer placed a white glass table with aluminum legs and 3 color chairs. A grey sofa with chaise longue placed in the living room with decorative pillows. Another round purple sofa was placed next to the grey sofa completed by 3D Stainless steel round tables. A panoramic window softens the hard angles of the apartment and brings a breathtaking urban scenery. The designer chose a long white curtain that obtain privacy and allows light in. A led lighting was placed along the top of the curtain. On the bottom of the media centre the designer planned a fire place with a large brick wall. On the lower part of the wall the designer located a concrete storage units. A screenio door leads to a corridor that enters  the parents master suite. The corridor includes on one side a sliding  glass door to the parents suite bathroom and on the other side a sliding glass door to a walking closet. A hidden led stripe lighting leads to the bedroom. In the master bedroom a blue bed was positioned under a wide window and on both sides the designer placed blue bed side tables and 2 hanging lamps. The master bathroom wall was covered in light grey tiles. Under a concrete bathroom sink the designer built a storage unit.

Read next: Elegant Penthouse Apartment In The Desert

The teenager master bedroom was planned as the parents master bedroom which includes a corridor that leads into the bedroom and along the corridor the bathroom and a walking closet are located. One wall was painted in light grey plaster: on this wall the designer placed the TV and some storage units. On the other wall a table was placed white hanging shelves. The back of the bed was covered in sand blasted white glass with a basketball player image. The designer kept a minimalistic design on the terrace as continuity to the apartment design. A big Pergola was set to give a cover at winter time. The pergola was designed with wooden beams painted in white. Lights were placed between the beams and 2 fans as well. An additional option is an electrical marquise that can be opened or close according to the weather. The terrace floor was covered in concrete. Giant plants were placed over white pebbles. On a breathtaking point of view of the terrace a bar was placed. The designer main work is houses and apartments design that characterized  by minimalistic line.” 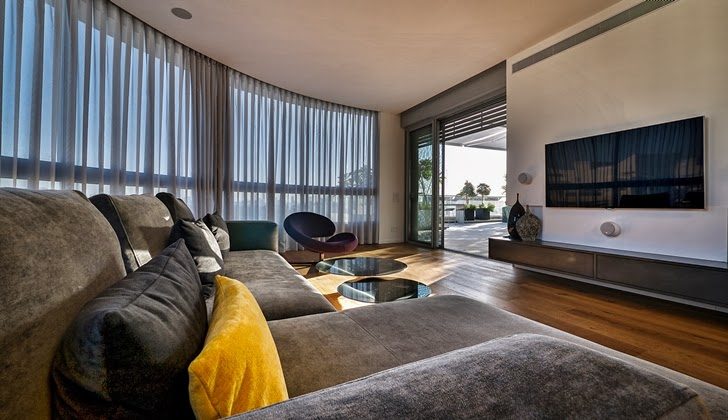 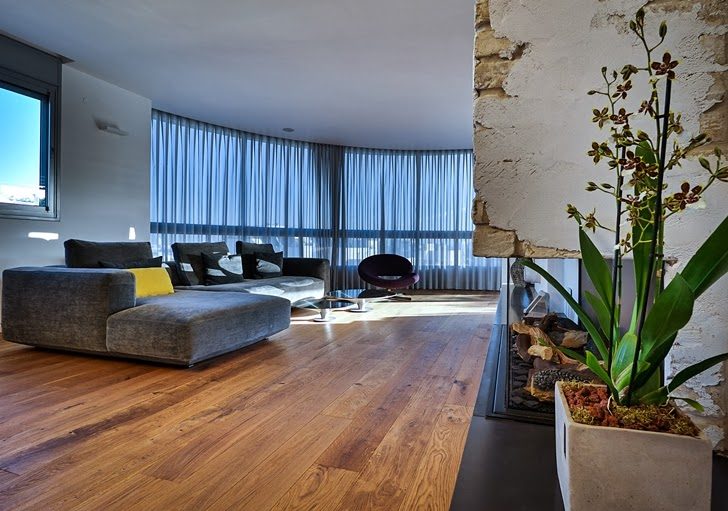 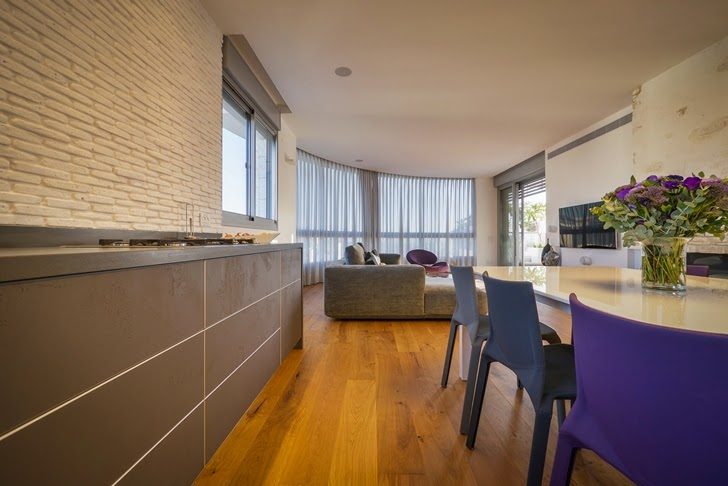 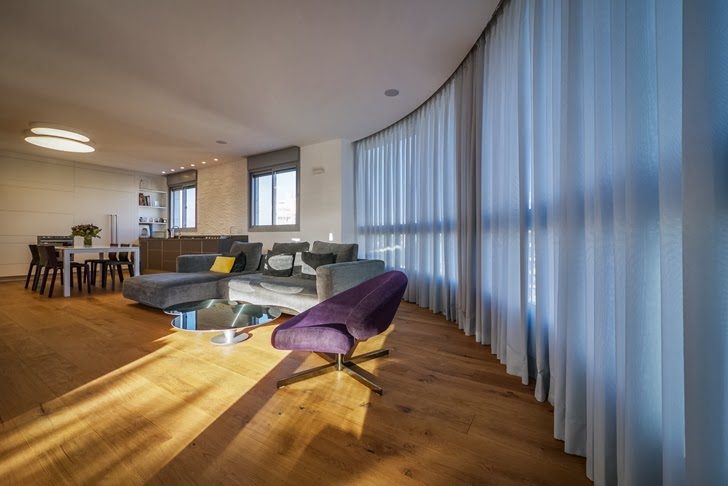 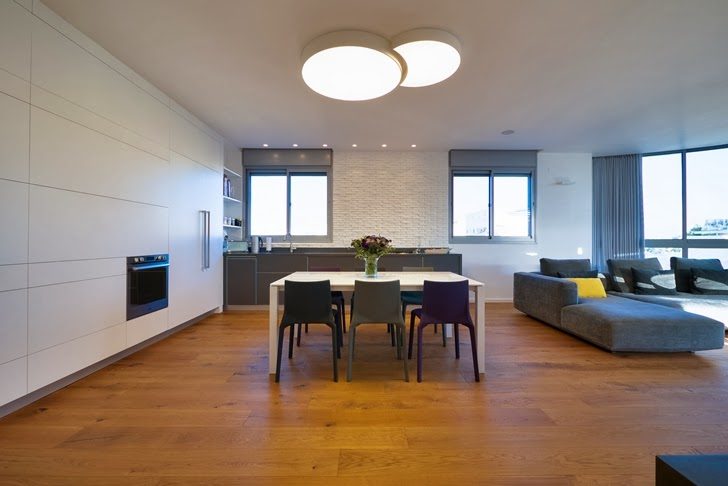 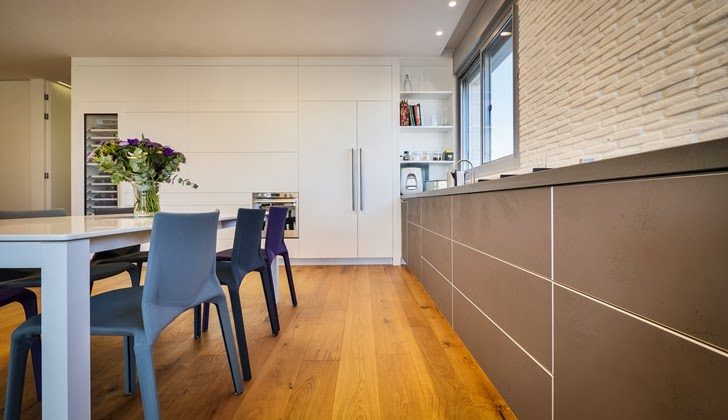 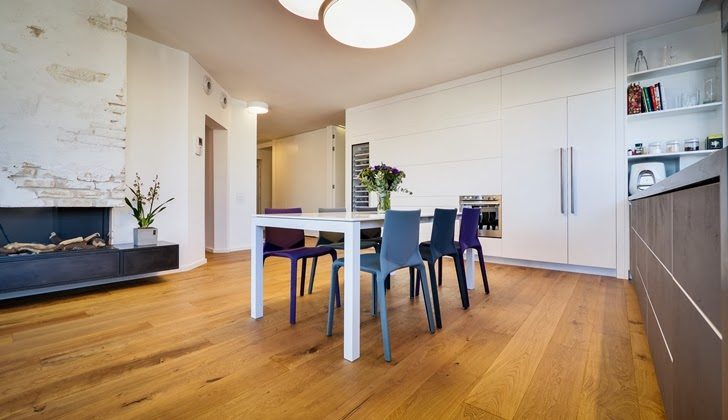 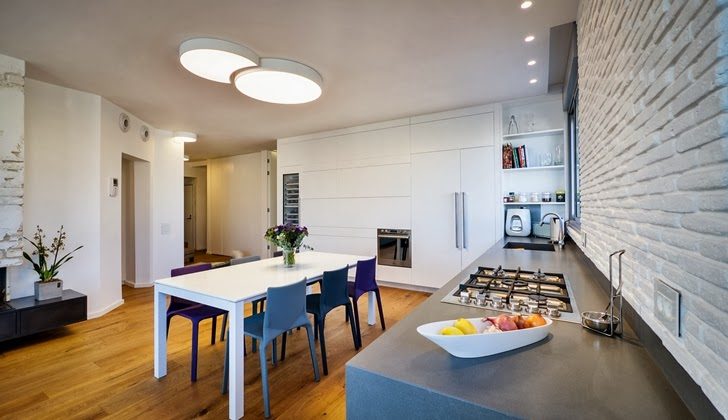 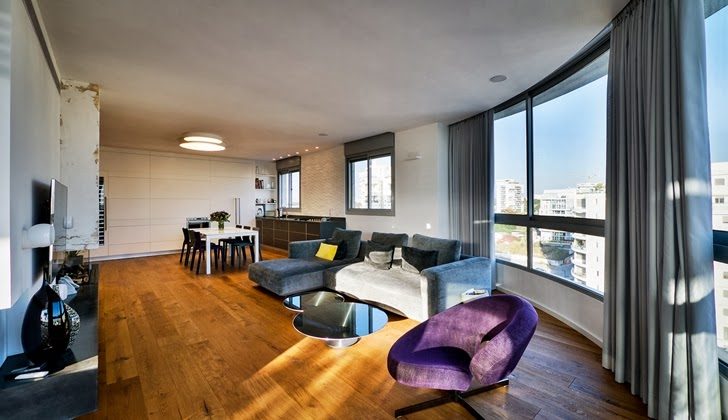 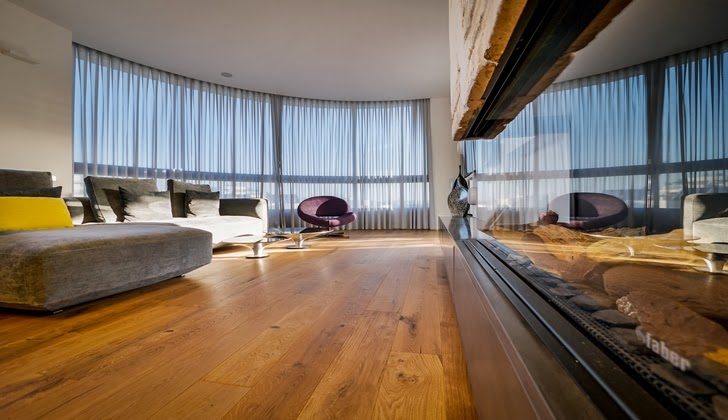 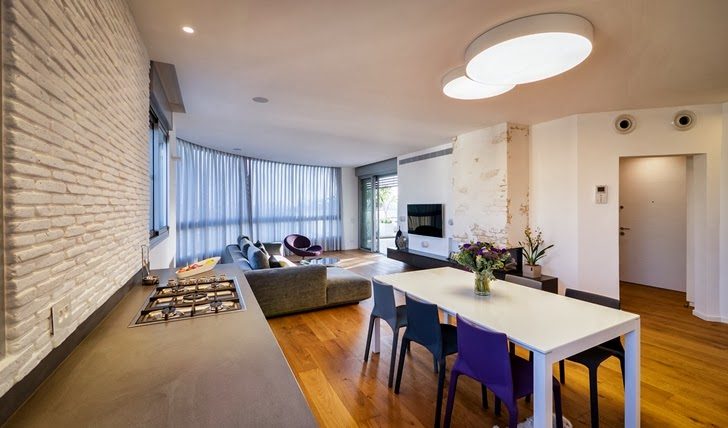 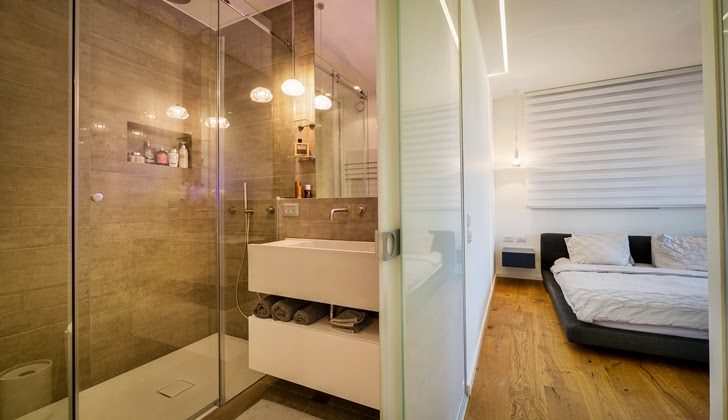 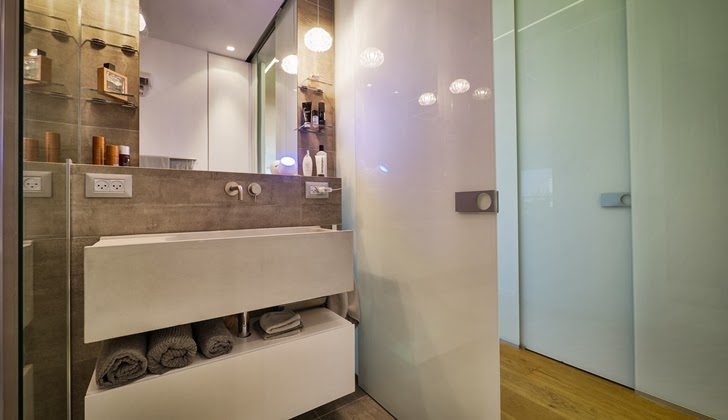 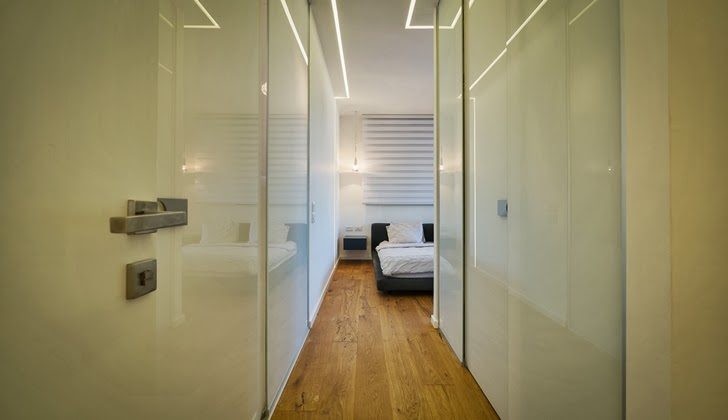 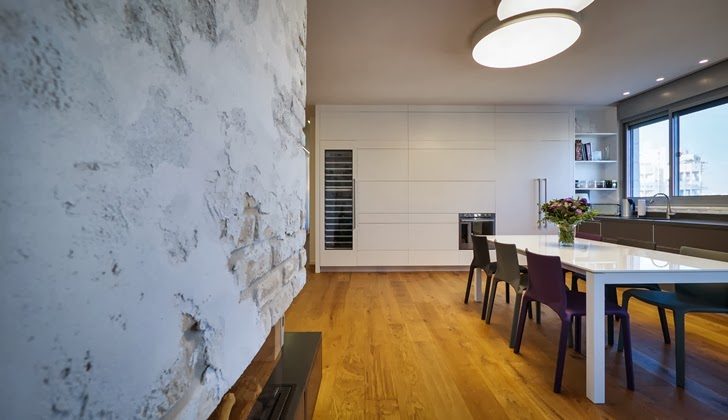 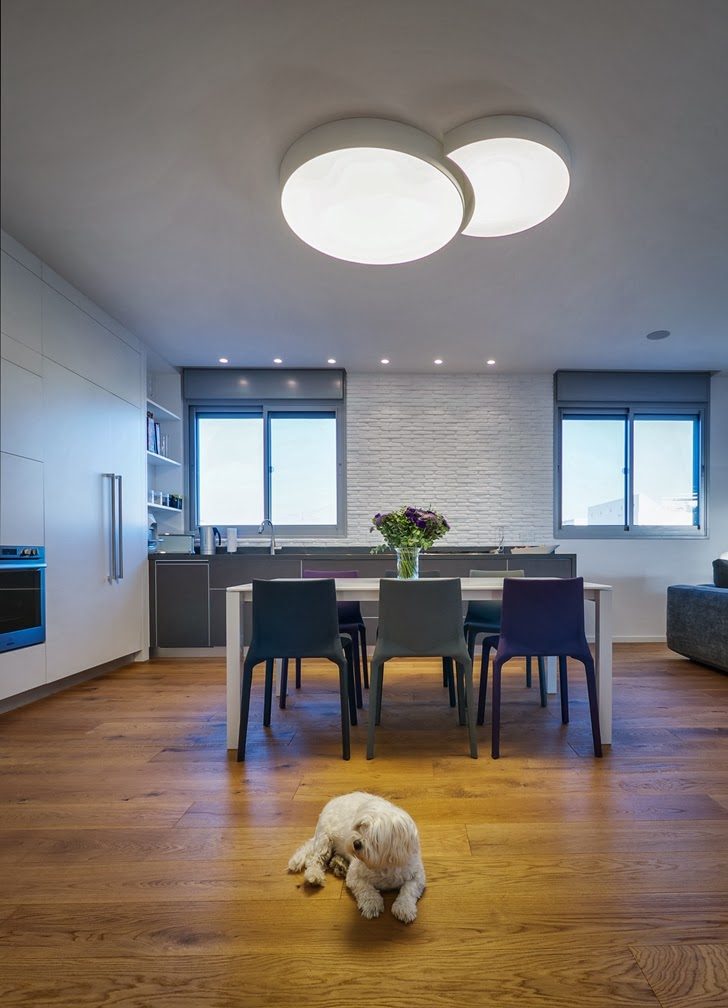 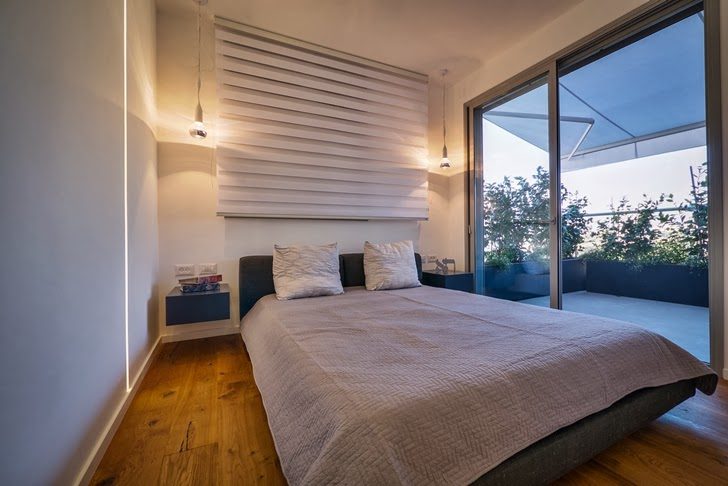 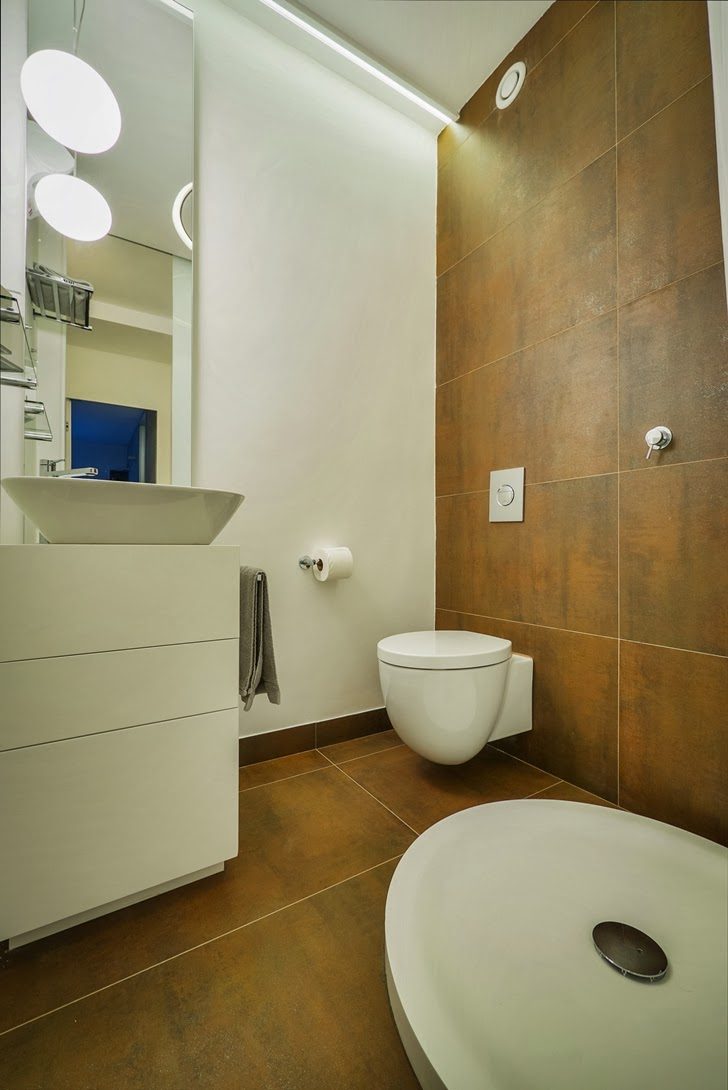 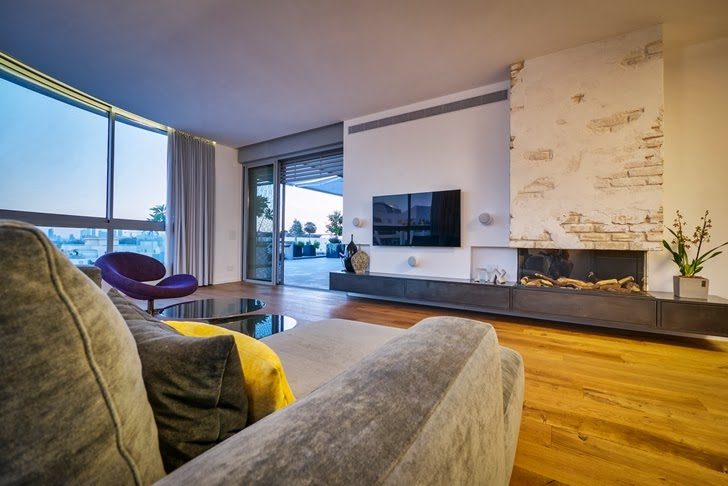 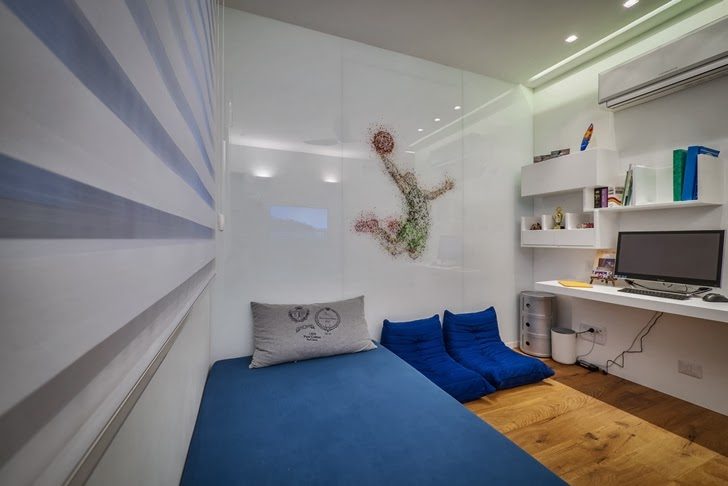 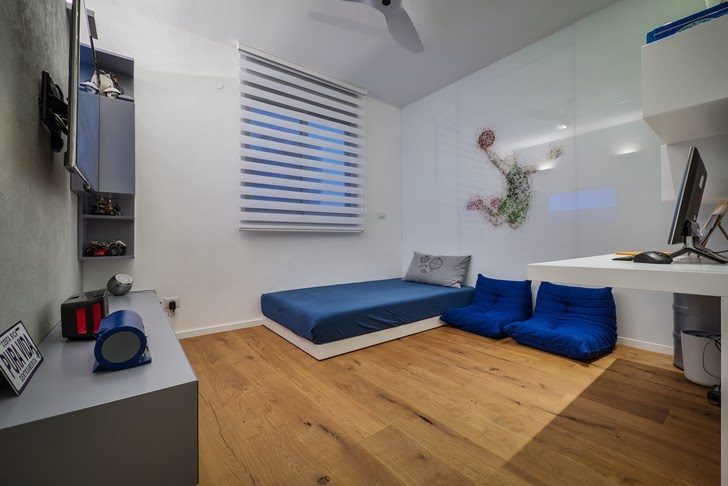 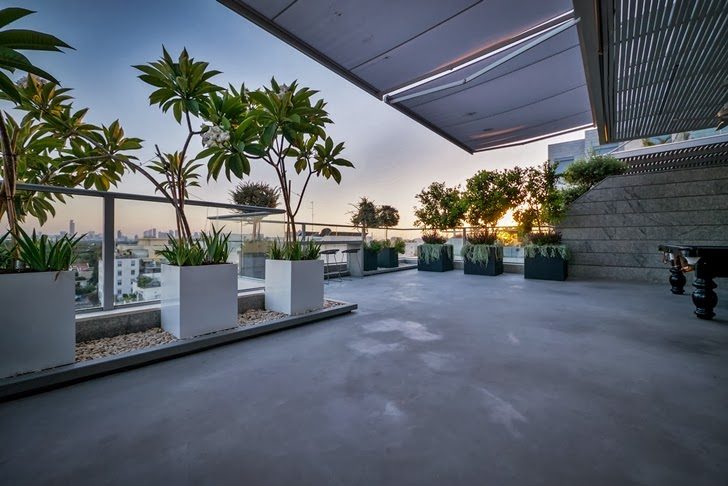 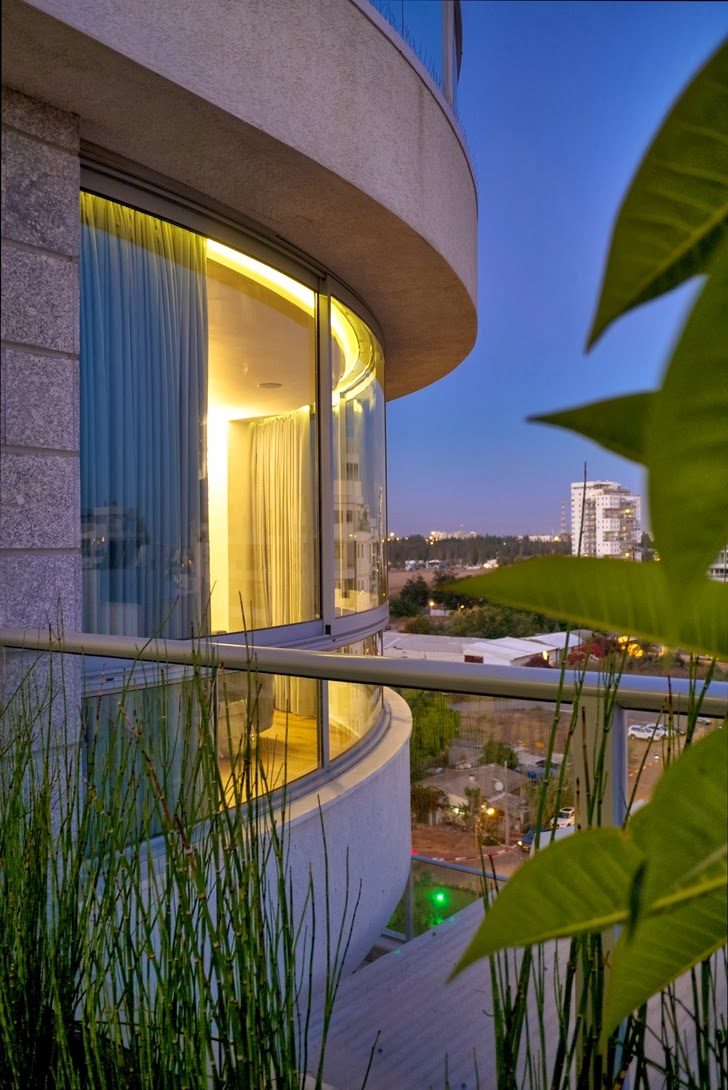